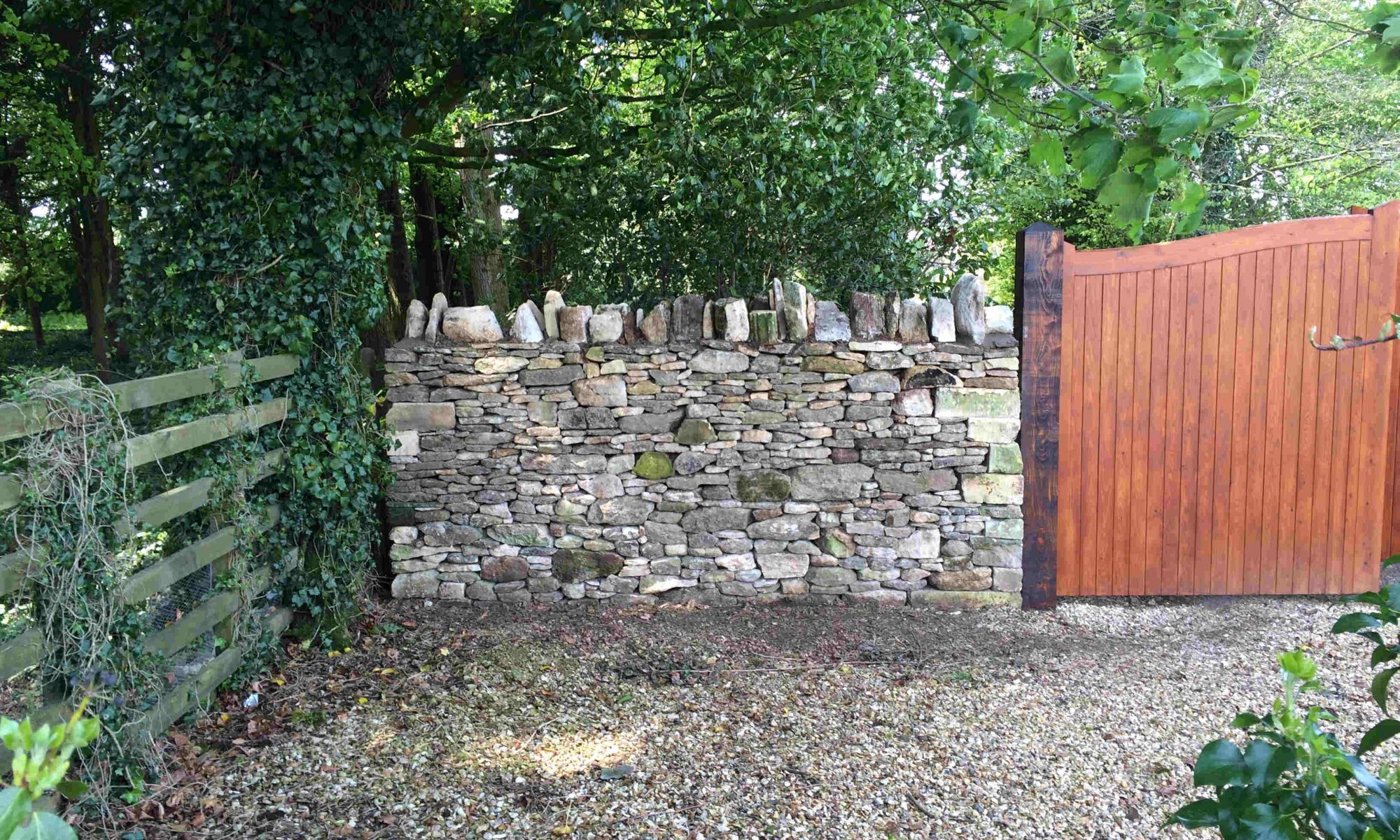 “Thanks very much for building such a beautiful wall and for being a pleasure to have around. We will miss you”.

“Just got back and am very pleased with the end product. Thank you for a great job. I would have no doubts about recommending you to anyone wanting a similar job”.

After the third repair to our rather elderly wall (100 years+) we realised that a complete rebuild was the best option. As you can see from the photos and the slideshow, the wall was big and so was the potential bill! After discussions with Nigel, we came to an agreement that we would do as much of the work ourselves as possible, working alongside him and under his guidance. We spent the whole of June 2011 taking down the old wall, preparing the ground and sorting stones while Nigel rebuilt the wall. As we put the last of the topping stones on we never wanted to see a stone again, but now we are really delighted to have been able to be involved in the creation of our new boundary and grateful to Nigel for his patience, flexibility and hard work.

Dear Nigel, I am writing to thank you for rebuilding our cotswold stone pond. We would like to commend you on the manner in which you undertook this work and the way in which you explained how the work would progress. We were particularly impressed with the standard of your work and we would have no hesitation in recommending you to anyone who needs a honest, dependable and reliable man who does what he says he will do.

Nigel did an outstanding job repairing and restoring our dry stone walls. The finished result looks fantastic – better than we could have imagined. He worked quickly, carefully and always as planned – so any intrusion was kept to a minimum and once he was gone, the only trace he had been there at all, was our beautiful garden wall!”

Nigel could have not been more helpful and courteous and the quality of his work is superb.
Richard and Clare, Great Somerford

We called Nigel a few weeks ago for a quote to rebuild a dry stone wall in our garden. The wall had partially fallen down last May during a bad storm. Nigel came to see the wall and after inspecting the problem – he gave us a very competitive quote. He finished the job on time, he hes been professional, punctual and reliable, and as a result of his job, we were very happy. We recommend him, he is a good specialist in dry stone wall and a very nice person. It was really nice to have him here with us. Thanks again Nigel.
Laura and Francesco, Corsham

A master of dry stone walling. Nigel is a rare breed; he is resposive and reliable and he delivers upon his promise.
Charles, Sutton Benger

When the recent bad weather took its toll on part of our dry stone wall very close to our house, we wanted the job done quickly and to a very high standard. We found exactly that in Nigel Chivers, a local specialist in dry stone walls. Nigel responded quickly to our request for a quote, gave us a sensible price and undertook the work swiftly in the most appalling weather . The work has been completed on time and looks totally natural and in fitting with the other walls. Nigel also left the site perfectly clean and tidy, as though he’d never been there ! We cannot recommend his work highly enough. “
Mr & Mrs Perrett Cold Ashton

Barbara and Ken had a problem! The wall recently built by a local “craftsman” had fallen down. Barbara was astonished “I thought stone walls stood for years”! What do we do, who do we contact? We were given Nigel’s name and like a knight riding in, he appeared, took down the wall where necessary and built it back up as it should have been. It’s not only what you see that matters but also what is never seen he said. What could have been a disaster was recovered.